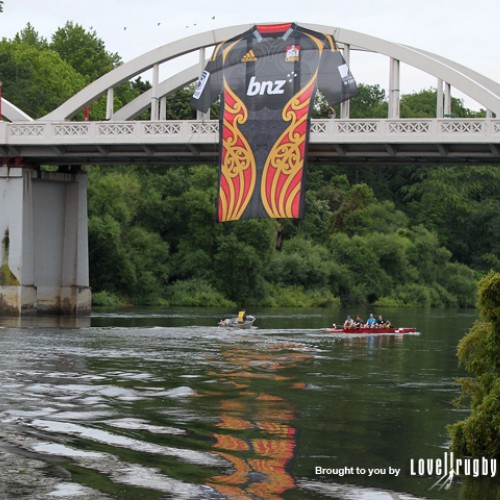 In conditions more like the rugby season than the start of the New Zealand summer, a giant version of the 2014 Chiefs rugby jersey was unveiled on Hamilton’s Fairfield Bridge this morning.

As steady drizzle fell on the city, the Chiefs jersey, measuring 13m x 13m, was attached to the middle “hump” of the famous Hamilton landmark. The hanging of the jersey was part a nationwide campaign by adidas, the company which manufactures jerseys for the five New Zealand Super Rugby franchises.

The organisers of the promotion, Spark Activate PR, chose Fairfield Bridge – one of Hamilton’s iconic locations – after exploring several sites in the city.  Work to attach the jersey began at 3am today, and it will stay in place until 7pm.

Mayor Julie Hardaker said the launch of the Chiefs jersey from the Fairfield Bridge was a wonderful site to see - especially given the historic classification of the bridge and its significance in the city’s 150th birthday in 2014.

“It’s a great old bridge, over the mighty Waikato River, and I couldn’t think of a better place to unfold the jersey.”

Mayor Hardaker said rugby remains a big part of the city’s culture: “I’m sure all Hamiltonians are waiting in anticipation for the Super 15 season, confident the Chiefs can do a three-peat.”

The Chiefs, who won the Super Rugby competition in 2012 and 2013, begin their defence of the title against the Crusaders at Christchurch’s AMI Stadium on Friday, 21 February, 2014. The team’s first match at Waikato Stadium is on Saturday, 1 March, against the Highlanders.

The tier-arched bridge, one of six road bridges spanning the Waikato River in the city, has earned the NZ Concrete Society’s Enduring Concrete Award at the society’s annual conference at Claudelands in October 2012.