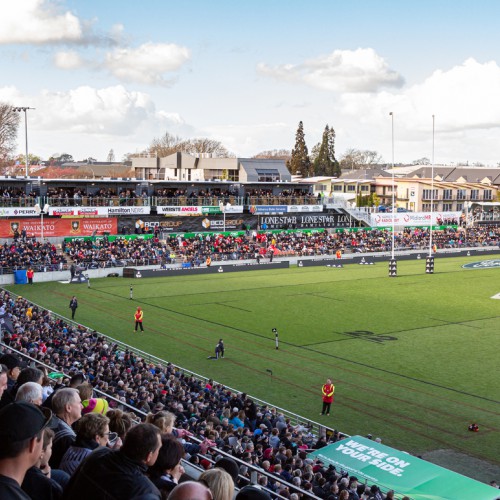 New Zealand rugby fans can lock in a blockbuster 10 Test international schedule as the Black Ferns and All Blacks prepare to defend their home turf in 2022.

The Black Ferns kick off their Rugby World Cup 2021 (played in 2022) preparations against Australia, Canada and the USA in the Pacific Four Series this June, while the All Blacks eagerly anticipated three-Test Steinlager Series against Ireland is in July, before hosting Argentina and Australia during the Lipovitan-D Rugby Championship.

New Zealand Rugby (NZR) Chief Executive, Mark Robinson said it was great to see a full international Test schedule in Aotearoa after the COVID disruptions of 2021.

“It has been a long time since the Black Ferns played a Test in Aotearoa and the Pacific Four gives New Zealander’s the opportunity to get excited about women’s rugby in the build-up to the Rugby World Cup and to get behind their team in what is a huge year for the women’s game.

“The All Blacks have a big season ahead with the Steinlager Series against Ireland and a tough Rugby Championship schedule. I know Foz [All Blacks Head Coach Ian Foster] and the team can’t wait for the season to kick off and I’m sure fans feel the same way. We have not hosted Ireland since 2012 and Argentina have not played here since 2018, so we cannot wait to welcome two great rugby rivals and their fans to our country.”

The Pacific Four Series will be the first international fixtures for the Black Ferns in New Zealand since August 2019, and the first series headed by new Director of Rugby Wayne Smith and his assistant coaches Wesley Clarke and Whitney Hansen.

The Black Ferns schedule features Tests against Australia, Canada and USA on 6, 12 and 18 June with tickets on sale next month. The cross-regional, annual international competition will serve as crucial preparation for Rugby World Cup 2021, (playing in 2022) which kicks off at Eden Park on 8 October, and will see the Black Ferns play at least three pool matches on home soil before the knock-out phase.

The All Blacks 2022 Steinlager Series campaign will kick off on Saturday 2 July against Ireland at Eden Park, Auckland, the first time the two sides have clashed since they played in Dublin last November. The second and third Steinlager Series Tests are in Dunedin, on 9 July and in Wellington on 16 July. The All Blacks home fixtures in the Lipovitan-D Rugby Championship feature two Tests against Argentina in Christchurch and Hamilton, and a Bledisloe Cup Test against Australia at Eden Park in Auckland on 24 September. The Pumas return to New Zealand for first time since 2018, with Orangetheory Stadium, Christchurch hosting the first Test on 27 August, and FMG Stadium Waikato hosting the second Test on 3 September.

The Black Ferns will also reignite their trans-Tasman rivalry will the first of two O’Reilly Cup Tests to be played at Orangetheory Stadium in Christchurch, with the second test to played in Australia. The All Blacks Test matches will be broadcast exclusive to Sky, live and on demand, while the Black Ferns Pacific Four Tests will be broadcast exclusively on Spark Sport, live and on demand.

Laurie O’Reilly Series (one of two test matches, the second to be played in Australia)

Pre-sale tickets to the Pacific Four Series and the 2022 Steinlager Series will go on sale on Tuesday 3 May and public sale on Tuesday 10 May at www.allblacks.com/tickets. Ticket on-sale dates for the remaining All Blacks and Black Ferns Test matches will be announced in due course. New Zealand Rugby recommends that fans buy tickets only through links on our official ticketing page.

The Black Ferns are current holders of the O’Reilly Cup.
Laurie O’Reilly passed away in 1998.

About Bledisloe Cup
Lord Bledisloe, Governor General of New Zealand from 1930 to 1935, bequeathed a trophy to the New Zealand Rugby Union with his name on it for perpetual competition between the All Blacks and Wallabies. The two countries have been playing for the Bledisloe Cup since 1931 and it is the symbol of trans-Tasman supremacy in rugby union.

The All Blacks are current holders of the Bledisloe Cup.