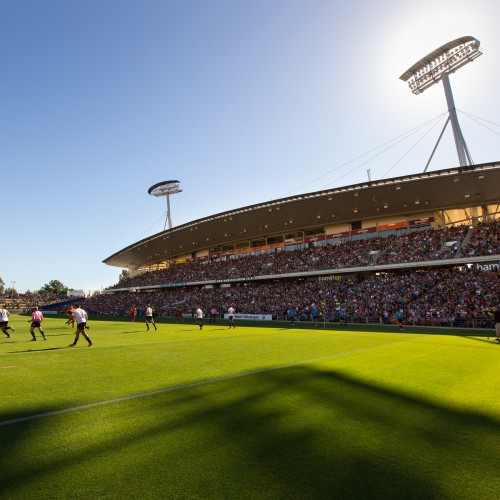 Following today’s unveiling of the 2014 NRL season draw the Canterbury-Bankstown Bulldogs are pleased to announce that they’ll be taking their Round 10 ‘home’ game on Sunday, 18 May to Waikato Stadium, Hamilton where they will take on the New Zealand Warriors at 4pm (2pm AEST).

“Many of our past and present stars, including Bill Noonan, Daryl Halligan, John Timu, Jarrod McCracken, Nigel Vagana, Roy Asotasi, Frank Pritchard, Greg Eastwood, Sam Perrett and Sam Kasiano are Kiwis so the Bulldogs already have a long established connection to New Zealand.

“Taking a game to Hamilton gives us an opportunity to thank existing supporters for their loyalty and also to invite more people to enjoy the experience offered by the Bulldogs and Rugby League.”

A range of activities are planned for the game, including initiatives to support the NRL’s Women in League round, and Sam Perrett expects there’ll be an enthusiastic response to a game at Waikato Stadium.

“The strong performances from the Kiwis in the World Cup has captured the interest of people in New Zealand and strengthened their support for what we do.  I think it’s great timing to showcase a club like ours in Hamilton,” Perrett said.

“I’m always inspired by the passion of the Bulldogs fans in New Zealand and I think they’ll really appreciate the opportunity to see the team in action in Hamilton.  I know a lot of our boys will also make the most to catch up with family and friends over there.”

Murray Jeffrey, the Director of Business Development and Marketing Event Facilities at Waikato Stadium is pleased to have such an iconic Club and brand like the Bulldogs going to Hamilton.

“The Bulldogs are one of the NRL’s strongest brands with a proud history and we are excited to be hosting such a high quality sporting event at Waikato Stadium,” Jeffrey said.

Bulldogs fans are now able to sign up as New Zealand Members at www.bulldogs.com.au enabling them to secure their seat to this historic game.