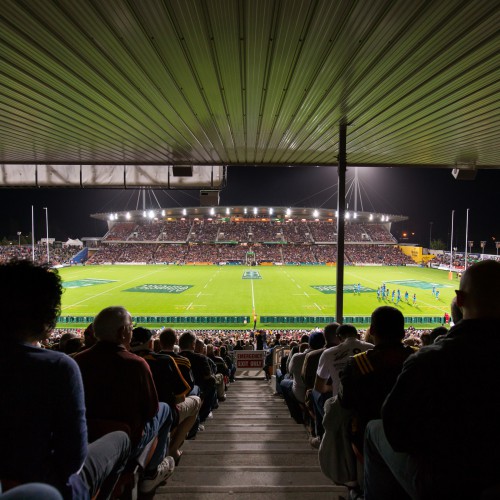 The Gallagher Chiefs will play the BNZ Crusaders in Fiji at ANZ Stadium, Suva on Friday 1 July 2016 in their Round 15 Investec Super Rugby match.

The unique fixture is the result of an extensive amount of work by multiple parties who were eager to have more top class rugby in the Pacific Islands.

Chiefs CEO Andrew Flexman said “We know how much the Pacific Island people love their rugby and this year’s test match between Manu Samoa and the All Blacks was testament to that.

“This is a great opportunity to take the Gallagher Chiefs to Fiji and help promote the game in their country.  Fijians have added a huge amount to New Zealand’s rugby heritage and it is fitting that we can give something back as well as expose our brand in a new territory.”

“The fixture is a culmination of a lot of hard work by numerous parties, none more so than the game promoter Fortress Information Systems and the Government of Fiji.  We should also acknowledge the New Zealand Rugby Players Association and our players for their support of this venture”.

There is great excitement within Fiji Tourism and the Government of Fiji about showcasing Fiji and its national stadium in Suva alongside the Fijian people’s love of rugby.  The match will be accessible for the local people with Fortress willing to provide discounted tickets for Fijian citizens to watch the match.

Exclusive ‘Chiefs Road Crew’ tour packages will be available soon for those fans that would like to be part of this special match and all 2016 members will automatically go in the draw to win ‘The Ultimate Chiefs Experience’ which is a trip for two to Fiji to watch their team take on the BNZ Crusaders.

The Chiefs Rugby Club continue their commitment to take Investec Super Rugby to as many parts of their region when they play their two pre-season games against the Waratahs in the Bay of Plenty and the Blues in Counties Manukau.  They will also return to Yarrow Stadium in New Plymouth for their Round 10 competition match against the Sharks.

Flexman said “We are a truly regional team and cover a vast area so want to connect with as many of our supporters as possible.”

Current members are invited to renew now and new membership enquiries can be made through www.chiefs.co.nz.