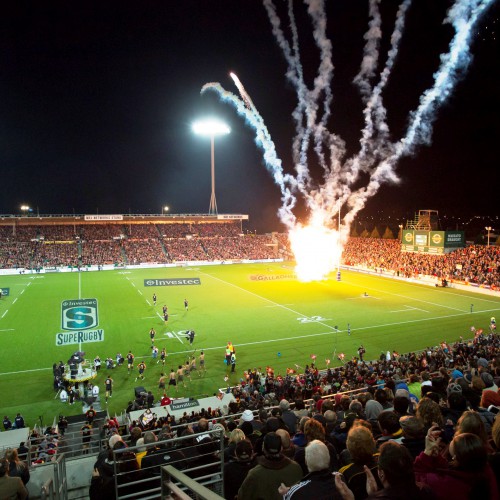 The Investec Super Rugby draw is out and features an extensive regional approach for the Chiefs, providing a large amount of fans in Chiefs country the opportunity to see their team play live.

Chiefs supporters are in for an exciting 2015 season with the return of Sonny Bill Williams and the inclusion of former All Black Hosea Gear.

World class All Blacks Brodie Retallick, Liam Messam, Aaron Cruden, Sam Cane and Tawera Kerr-Barlow all return for what will be an action packed season for rugby enthusiasts with no break for usual the June International window due to the Rugby World Cup later in the year.

Chiefs coach Dave Rennie said “We are working on establishing a squad that will help us win our third title. We conducted a robust review process of our 2014 season and with some adjustments believe that 2015 will be another exciting year for Chiefs fans.”

Afternoon rugby returns to Waikato Stadium on March 28 when the Chiefs play the Cheetahs. The earlier kick-off time means that more families will have an opportunity to enjoy live rugby and the pre-match build up that will be focused on younger Chiefs fans.

The FIFA World Cup stadium black-out, affecting both Waikato and Yarrow Stadiums has had a bearing on match allocations. It is a situation that the Chiefs Rugby Club has viewed as a positive opportunity for their fans with matches to be played at three different venues; Waikato Stadium, Yarrow Stadium and Rotorua International Stadium.

Chiefs CEO Andrew Flexman said “We have worked hard to get a round robin match in Rotorua for the first time in a number years and it will be important for the people of Rotorua to get out and support the Chiefs so that we can justify playing matches in the region in the future. We also look forward to the Chiefs returning to Taranaki for two important matches in 2015.”

Chiefs memberships are now on sale with some great new options, including the introduction of student pricing in selected zones. In an exciting initiative to grow membership numbers from the 4,500 in 2014, if the Chiefs reach 5,000 members before 27 February 2015, every member will go in the draw for the Ultimate Chiefs Experience. The package will include a weekend for two in Brisbane with the Chiefs when they take on the Reds.

Visit www.theloyal5000.co.nz or phone 0800 4 CHIEFS to be part of the “Loyal 5000” Chiefs family. Individual game tickets will be on sale from 5th January for Yarrow Stadium and from 1st February for the Waikato and Rotorua matches.

The Chiefs have made the play-offs for the last three years and won the Investec Super Rugby title in 2012 and 2013. The full Chiefs squad is expected to be announced on Wednesday 29 October with the squad assembling Thursday 27 November.