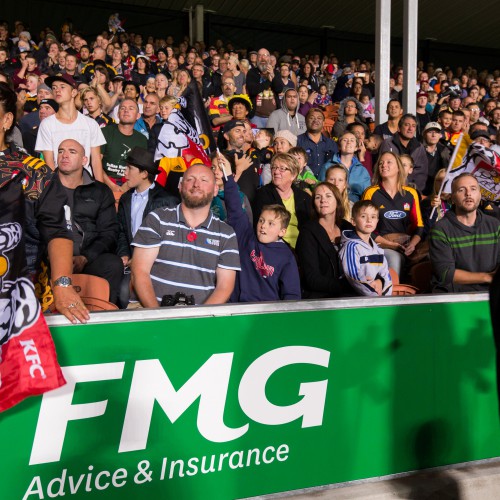 The agreement, announced today, will see FMG (Farmers Mutual Group) hold naming rights for the stadium for the next 10 years, with an option to extend the arrangement for a further five years. From October, the facility will be known as FMG Stadium Waikato.

FMG is New Zealand's leading rural insurer and is currently enjoying a period of growth across the country, and is one of New Zealand's most respected brands. It is owned by its rural policy holders, is constructing new offices in Hamilton, and will be increasing staffing numbers in the region.

"FMG is a well-respected organisation and the perfect fit for Waikato Stadium," Mayor Hardaker says.

"FMG is 100 per cent New Zealand owned and has a strong connection with rural New Zealand.    The Council and FMG are significantly aligned to growth in the city and region. These factors made this agreement an attractive opportunity for Hamilton.”

Details of the financial aspects of the new commercial rights arrangement remain confidential, but Mayor Hardaker says the sponsorship  will be good for the region.

"We're not selling the stadium. This is a naming rights sponsorship, and the facility will become known as FMG Stadium Waikato, keeping its strong regional identity and link to the Waikato."

A portion of FMG's investment will go toward enhancing the experience of patron and event participants.

Waikato Stadium was built on the site of what was formerly Rugby Park, and is home to the Chiefs Super Rugby Franchise and the Waikato Rugby Union. It formally opened in 2002, with a Super Rugby match between the Chiefs and the Crusaders. It is multi-purpose, having also hosted football (the FIFA U-20 World Cup 2015), rugby league, motorcycle stunt crews Crusty Demons and Nitro Circus, as well as American football (gridiron) and concerts.

Mayor Hardaker says Council is open to discussion with other organisations interested in similar arrangements for Seddon Park (the city's international cricket ground), and Claudelands.

"If would-be venue sponsors align with Council's goals and aspirations for the city, then we're keen to talk."