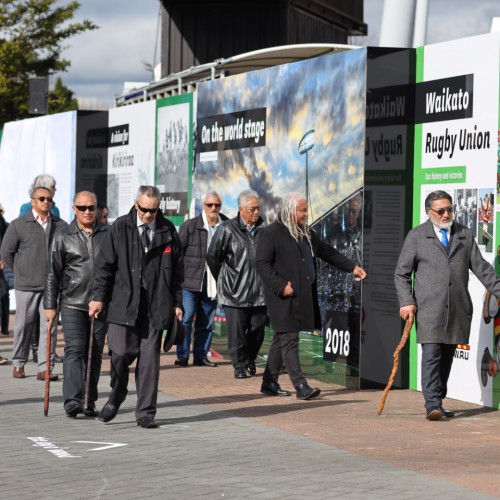 The History Wall has been placed outside the venue’s grounds, along the Tristram St end of the stadium and below the Chiefs’ corporate boxes. Its panels commemorate FMG Stadium Waikato’s journey from its rugby roots through to its much-expanded scope in hosting a wide variety of other sporting, business and entertainment-related events.

One of the wall’s interactive features is a ‘press to play’ radio sound bite from the controversial 1981 Springboks tour; another feature enables visitors to have a photo taken with the venue’s rugby greats. The History Wall also extends into eye-catching designs along the neighbouring footpath.

FMG Stadium Waikato, a key city asset owned by the people of Hamilton, is managed and maintained by H3 – a unit of Hamilton City Council. Its history stretches back to 1921, when the Waikato Rugby Union (then the Hamilton Rugby Union) took a lease on the venue’s site in 1921.

Following the development of its rugby fields, Hamilton’s ‘Rugby Park’ was formally opened by Member of Parliament J A Young in 1925 (although players had to wait until 1929 for hot showers to be installed!).

“As the home of rugby in the Waikato, FMG Stadium Waikato caters for every level of the game, from provincial titles to Super Rugby, as well as Ranfurly Shield clashes and regular All Blacks matches,” says Mayor Southgate. “The panels reflect this, and they also feature the people and partnerships behind the venue over the years.”

Mayor Southgate says the site’s cultural heritage has been highlighted since 2004, with the unveiling of the Whatanoa Gateway, followed by 2005’s unveiling of the Players' Tunnel Carvings. “Now with the History Wall project, we’ve included a panel which provides some more detail about these earlier installations.”

The History Wall project, fully funded by the venue’s proud sponsor FMG, has taken around eighteen months to complete. FMG’s Chief Client Officer Andrea Brunner says the project strengthens an already-valued relationship between Council, it’s H3 group, and FMG. “FMG is right behind the continued success of the venue,” says Ms Brunner. “Along with local businesses and our community, we’ve also welcomed the venue’s expansion from rugby into other events and functions.”

Mayor Southgate agrees, noting that as well as hosting two Rugby World Cups (1987 and 2011), the stadium’s been the venue for World Cup events for other sporting codes.

“The next ‘big one’ we’re excited about is soccer’s FIFA Women’s World Cup, coming to New Zealand in 2023. It’s another brilliant opportunity to put Hamilton on the world stage.”

“The stadium allows us to connect as a community and often, as a country. And we all know what happens when there is a big event….we know what that means to our moteliers, to our restaurants and to our retailers.”

“I hope people visiting FMG Stadium Waikato will spend some of their time at the History Wall and gain a real sense of the venue’s significance.”

The History Wall’s blessing and unveiling took place prior to the afternoon’s Gallagher Chiefs vs Highlanders game.