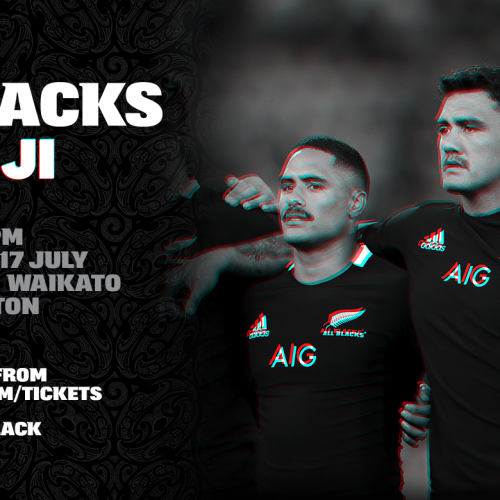 An epic festival of All Blacks, Māori and Pasifika rugby matches has been confirmed for Aotearoa / New Zealand this July with the All Blacks, Māori All Blacks, Fiji, Tonga and Samoa all in action, and two blockbuster double-header match days unveiled.

The 2021 Steinlager Series will be anchored on two Tests between the All Blacks and Fiji in what will be the first time the All Blacks have played back-to-back Tests against the Flying Fijians.

The All Blacks have played Fiji nine times before, but not since 2011 in what was the final Test match at Carisbrook in Dunedin. The first match against Fiji was in Suva in 1974, with the All Blacks pipping the home side that day 14-13.

The Steinlager Series will kick off on Saturday 3 July with the All Blacks playing at Mt Smart Stadium, Auckland, for the first time in what will be an historic Test against Tonga. The match is also a double-header with the Māori All Blacks playing Manu Samoa beforehand.

The action moves to Dunedin the following weekend for the first All Blacks vs Fiji Test at Forsyth Barr Stadium, Dunedin, on Saturday 10 July. The following weekend, Saturday 17 July, will be a second double-header day of international rugby, with the All Blacks second Test against the Flying Fijians at FMG Stadium Waikato in Hamilton, and Tonga playing Samoa in a RWC 2023 Qualifying match prior.

New Zealand Rugby NZR CEO Mark Robinson said: “We’re absolutely delighted to be able to confirm what will be a fantastic series of matches featuring the All Blacks, Māori All Blacks and our Pacific neighbours, Fiji, Tonga and Samoa.

“We look forward to welcoming the Flying Fijians to New Zealand for what will be an historic, first-ever, back-to-back All Blacks Test Series against them.

“We know the passionate All Blacks and Māori All Blacks fans, together with the fanatical Pasifika fans, will make these game days very special occasions.”

Fiji Rugby Chief Executive John O’Connor said: “We would like to thank New Zealand Rugby and World Rugby for their support in giving us this great opportunity for our players and, likewise, our coaching panel.

He added that, despite Fiji facing a second wave of COVID-19, Flying Fijians Head Coach Vern Cotter was trying everything possible to assemble the best Fijian team to take on the All Blacks, after a lapse of ten years.

“We are excited about this great opportunity and will be doing all we can to prepare well for the two Test matches,” he said.

The All Blacks last played Tonga in Hamilton in 2019 ahead of the Rugby World Cup and have played ‘Ikale Tahi six times.

Meanwhile, Manu Samoa will also play a second RWC 2023 Qualifying match against Tonga, with further details on that match to be confirmed at a later date.

The All Blacks schedule for The Rugby Championship, as well as an additional Bledisloe Cup Test, will be announced in due course, with Eden Park and Wellington’s SKY Stadium expected to host a number of games.

Pre-sale tickets to the Steinlager Series will go on sale on Tuesday 1 June and public sale on Friday 4 June at www.allblacks.com/tickets.

Hamilton Test tickets are from $15 for children and $30 for adults (general admission). New Zealand Rugby recommends that fans buy tickets only through links on our official ticketing page.