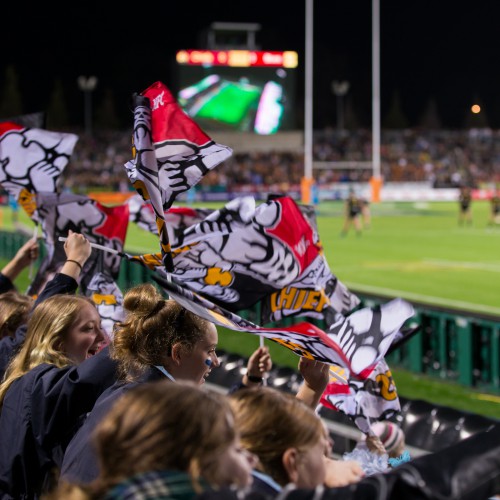 Kiwi fans have a feast of rugby to look forward to with the Gallagher Chiefs kicking off their season against the Highlanders in Dunedin before hosting back-to-back Friday night clashes against the Blues and the Hurricanes at FMG Stadium Waikato in Hamilton.

The historic highlight of the 2017 rugby calendar takes place on 20th June when the Gallagher Chiefs play the British and Irish Lions at FMG Stadium Waikato. With local legend Warren Gatland leading a formidable visiting team, experiencing this match in person is certainly one for the bucket list.
Other exciting home matches include two early Saturday afternoon kickoffs against quality Australian opposition. On the 3rd of June the Gallagher Chiefs will take on the Waratahs at 5:05pm and then six weeks later they’ll host 2016 Australian Conference winners the Brumbies at 5:15pm in their final regular season competition game.

The Sunwolves have an exciting opportunity to experience Hamilton’s fantastic hospitality in Round 10 when they visit FMG Stadium Waikato for their first ever Investec Super Rugby match on New Zealand shores and against the Gallagher Chiefs.

Then it’s a road trip to the southernmost point of Chiefs country in Round 11, where Taranaki fans can look forward to welcoming five of their players home in a thrilling trans-Tasman clash between the Gallagher Chiefs and the Reds at Yarrow Stadium in New Plymouth.
Eager New Zealand rugby fans have a unique opportunity to combine world-class rugby with an unforgettable tropical holiday in Round 13, when the Gallagher Chiefs return to Fiji to play the BNZ Crusaders at ANZ Stadium Suva. The special Pacific Island May 19th rematch follows on from the highly successful historic game held last season in Fiji.

Chiefs CEO Andrew Flexman was excited to be able to confirm the fixture for 2017.“We are thrilled to be afforded the opportunity to play in Fiji again in 2017 off the back of a wonderful occasion in Suva last year. The people of Fiji love the game of rugby and it is important that we do our bit to promote the standing of the sport in that country. We know many of our Chiefs fans thoroughly enjoyed the experience of travelling to the Island destination last year so it is another opportunity for them to get on the road with the Gallagher Chiefs and be part of something truly unique”. “We would again like to acknowledge the efforts of game promoter Fortress Information Systems, the Government of Fiji and the Fiji Sports Council who have worked tirelessly to make the game possible”.

Those who don’t want to wait until May to catch some rugby in the sun can cheer on the Gallagher Chiefs in their first preseason game of the new season against the Bulls on Wednesday 8th February at Ballymore in Brisbane. The game precedes the inaugural Brisbane Global Tens tournament which kicks off just three days later on 11th February.
Gallagher Chiefs memberships are now on sale. Secure your seats to watch some of the best rugby players in the world go head-to-head in the 2017 Investec Super Rugby competition. There are many fantastic benefits on offer and exciting experiences to be had. Get yours today http://www.chiefs.co.nz/tickets-memberships/tickets-memberships/membership/new-members