Great river city comes to the party for weekend of rugby 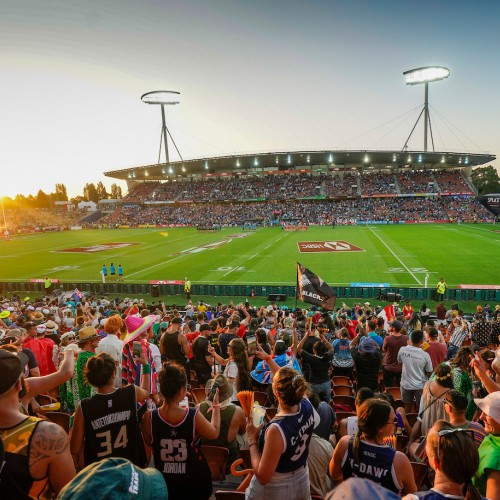 Hamilton’s third performance on the Sevens world stage has seen another stellar weekend of sport in the city.

Hamilton Mayor Paula Southgate says the event was another demonstration of the world-class venue, the commitment of staff who run it – and the positive collaboration between H3 Group, Hamilton City Council, New Zealand Rugby and events company 37 South.

“The city has come alive this weekend with a fabulous, family-friendly atmosphere. It’s great for our local community, fantastic for visitors to see Hamilton in top form, and provides an economic boost to hoteliers, retailers and restaurant owners. I’m very proud of the city,” says Mayor Southgate.

HSBC New Zealand Sevens General Manager Steve Dunbar said the intensity of the respective finals had been a fitting finale.

“We had 18,000 on Saturday, and nearly 20,000 on Sunday, near-perfect weather and two extremely popular champions who had to really fight hard for their titles, so we couldn’t have asked for much more.”

37 South Managing Director and co-promoter Dallas Fisher said the past three years had showed the value of catering to a wide variety of event goers.

“What a fitting way to cap off three incredibly successful events in Hamilton. We’ve had the support of the city and the community all the way and we can’t wait to come back in 2022. We know we can deliver big events well and this will give us confidence to relook at what works well and then take the event to the next level.”

Full results for the 2020 HSBC New Zealand Sevens can be found here.