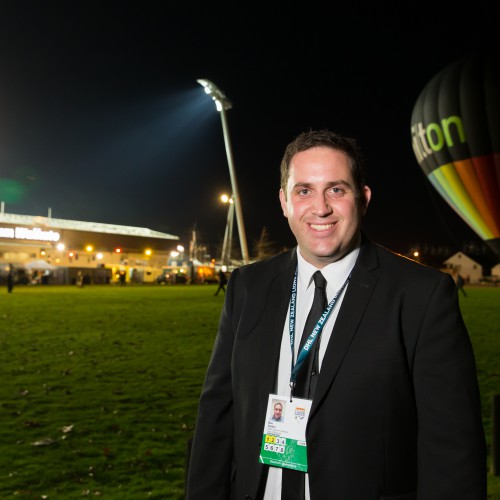 Ben was named the EVANZ’s ‘Simpson Grierson Operations Manager of the Year’, with the judges praising him for his “cool and calm demeanour, strategic mind and passion for events”.

“Ben is a rising star of both H3 and the event industry. Ben has a great motivation to improve the venue and events they deliver, as well as to make sure his team is able to have their own opportunity to grow within the organisation,” the judges said.

“This award reflects Ben’s passion for our venues and the events taking place there, as well as his natural leadership qualities. Ben is highly regarded and is a true asset to our business and the wider events industry,” he says.

Ben has been part of the H3 team since 2013, working his way up from Business Support Manager to his current role as Venue Manager – Stadia. In 2016, Ben’s responsibilities were extended to not only oversee the delivery of public events at FMG Stadium Waikato and Seddon Park, but also at H3’s multi-purpose events venue Claudelands.

Ben’s win makes it the third year in a row that a H3 staff member has received EVANZ’s Operations Manager of the Year title, with Technical Services Manager Sven Ladewig winning the award in 2016 and Operations Manager Claire Toko topping the category last year.

“We are proud to have our team recognised in this category three years in a row – our venues are world-class, however what truly makes our organisation successful are our people. Winning this national award for three consecutive years highlights the depth of talent we are fortunate to have at H3,” says Mr Murray.

FMG Stadium Waikato was also shortlisted in the Eventfinda Large Venue of the Year category alongside Spark Arena and Mt Smart Stadium, with Spark Arena taking out the title.

Meanwhile H3’s catering partner Montana Group was a finalist in the Health Promotion Agency Excellence in Host Responsibility Award. This award was won by Eden Park.

H3 is a unit of Hamilton City Council responsible for overseeing the management of Claudelands, FMG Stadium Waikato and Seddon Park.