Hamilton gears up for second slice of rugby league history 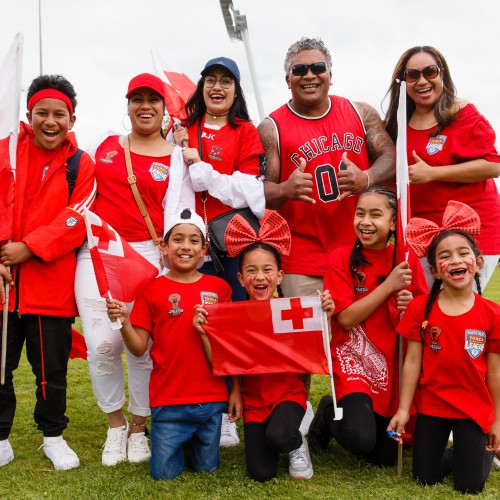 Sports fans get a second chance to experience the energy, passion and excitement of the Rugby League World Cup 2017 in Hamilton this weekend.

This Saturday, 11 November,, the city’s second tournament match will be held, with co-hosts and 2008 World Champions the New Zealand Kiwis clashing with Mate Ma’a Tonga in a match set decide which team tops Pool B.

“The match was really remarkable: our staff and a number of sports media personalities and commentators have talked about the atmosphere at the stadium as being among the best they have experienced,” Mr Hooker says.

“The stands were a sea of Tongan red, dotted with big clumps of Samoan blue, and were a great reflection of the friendly Pasifika rivalry we hoped for. We’re looking forward to more of that good-natured and respectful rivalry this weekend.”

Mate Ma’a Tonga fans are again expected to descend on Hamilton in large numbers to support their star-studded team, which has been the subject of extensive media coverage since being named in the week before the tournament began.

“We’re very fortunate to have two of the most talked-about teams in the tournament going head-to-head in Hamilton,” Mr Hooker says. “It couldn’t have been scripted better for us as a host city, and we’re hoping the fans for this match can recreate the remarkable atmosphere from last weekend’s game.”

Mr Hooker emphasised the call for friendly respectful rivalry among fans of both teams.

“Again we’re asking people to respect each other, respect the event and the venue, and respect the people involved in delivering this great event for the city and the fans.”

Traffic and transport contingencies will again be implemented for this Saturday’s match:

Fans are again being urged to car pool to the game or use the free Busit services which depart from Hood St to the stadium every 10 minutes, and from the stadium (Tristram St) back to the central city immediately after the final whistle.

There is also a dedicated fan walking route to Waikato Stadium from the central city, from Victoria St, via Bryce St and Tristram St. The walking route will be marked out with footpath decals, along with signage created by local school children.

Saturday’s match kicks off at 5pm. Tickets are still available with fans urged to purchase from the official outlet - rlwc2017.com

Visitors needing accommodation in Hamilton can take advantage of the booking services available at Hamilton’s i-SITE.