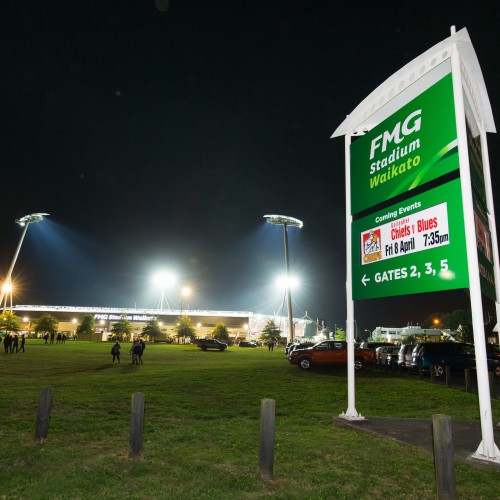 Hamilton's FMG Stadium Waikato is set to host the Wellington Phoenix in December in the team's first competitive A-League football match in the city.

The 2016-2017 A-League draw was announced today, and includes a fixture between Wellington Phoenix and the Central Coast Mariners at FMG Stadium Waikato on 10 December.

"We're extremely pleased to be welcoming the Phoenix back to FMG Stadium Waikato," Mr Murray says. "We hosted seven matches in last year's FIFA U20 World Cup, and those were a real success – so this game will further enhance our credentials as a city and stadium capable of hosting top-flight football."

The Phoenix has played one previous match at FMG Stadium Waikato, a pre-season fixture in 2010 – shortly after the All Whites' unbeaten run at the FIFA World Cup.

"This one will be a competitive match so will have that extra edge," Mr Murray says. "We look forward to seeing the region's football community take up the chance to cheer on the team that waves New Zealand's flag in the Australian competition."

David Dome, Wellington Phoenix General Manager, says the club is pleased to be able to bring its brand of football to Hamilton.

"We're really impressed by FMG Stadium Waikato and the team responsible for running the venue," Mr Dome says. "The playing surface is one of the best in the country, it's a proper rectangular sports field,the crowd is close to the on-field action - and that's all exciting for the players.

"And as this is a Saturday evening match we're hoping Hamilton's sports fans get in behind the team, take advantage of the opportunity to see top Australasian professional football, and make a real night of it."