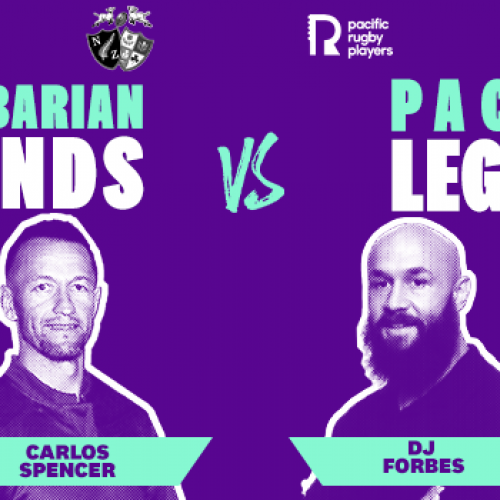 Carlos Spencer and DJ Forbes will be among a cast of Pacific Island and New Zealand rugby legends who will converge on Hamilton for a star-studded curtain raiser to the All Blacks v Tonga Test match at FMG Stadium Waikato on 7 September.

Coached by All Blacks greats Sir Michael Jones (NZ Barbarian Legends) and Tana Umaga (Pacific Legends), the two squads will be made up of a generation of well-known players, taking rugby fans for a walk down memory lane.

“Rugby has always had the power to bring people together and to inspire and motivate, so when I was asked to get behind this match and help out with the New Zealand Barbarian Legends I didn’t hesitate,” Jones said.

“It’s a great chance to talk about this incredibly important issue and I know the players will be role modelling the importance of healthy lifestyles as they dust off their boots and train for this match.”
The Pacific Legends will be built around Forbes, a proud Samoan New Zealander who retired in 2017 after more than a decade as a fixture in the All Blacks Sevens.

Headlining the NZ Barbarian Legends line-up is former Māori All Blacks, Auckland and Blues first-five Spencer, who played 35 Tests for the All Blacks between 1997 and 2004.
Spencer, who retired from serious rugby in 2010, but made a cameo for the Blues at the Brisbane Tens in 2017, said:

“It’s a great opportunity to start some conversations about a really critical health issue and what better way to do that than pull the boots on again with a bunch of great players. There might be a few tired bodies at the end of the day, but the skills are still there and the competitive spirit, so it should be a lot of fun.”

The New Zealand Rugby (NZR) hosted event will be live on SKY TV and has been scheduled for a midday kick off to allow those attending the All Blacks v Tonga Test at 2.30pm to plan a family-friendly day at the rugby.
The driving force behind the curtain raiser is the MaiBody, MaiFuture health project launched by the Pacific Rugby Players (PRP) last year that sees high profile rugby players role modelling healthier lifestyles to fight obesity and diabetes.

Diabetes is one of New Zealand’s most serious health issues, but with seven of the 10 countries with the highest incidence of diabetes being from the Pacific, it is of even greater concern for the Pacific Islands.
“We have a major problem with obesity and diabetes in our communities but through rugby we are trying to make a positive difference and lead the way for healthy lifestyles,” PRP Chief Executive Aayden Clarke said.
“Rugby provides a great platform for us to speak directly to our Pacific Island and Māori communities and by bringing all these players together hopefully our message will be heard, and we can really get our people to sit up and make some changes.”

New Zealand Rugby Players’ Association (NZRPA) Player Services Manager and former All Blacks halfback Kevin Senio said there were plenty of nervous answers when he started to call around his former peers.

“Some of the guys will be hitting the road and dusting off the gym gear, but that’s really the point. It’s never too late to get active and change your lifestyle and sports, including rugby, are a great place to start.

“It wasn’t difficult to get buy-in from the players and they are all excited about the prospect of playing on the big stage one more time, reconnecting with their friends and being able to make a difference.”