Hamilton's NZ Sevens debut a success for the city 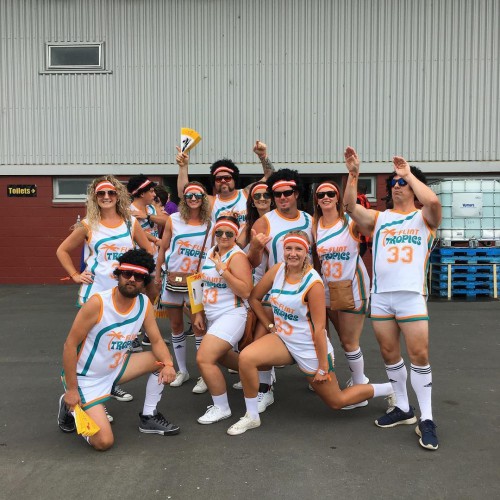 Hamilton has made a hugely positive impression in its debut on the HSBC World Rugby Sevens Series circuit.

FMG Stadium Waikato hosted the New Zealand Sevens for the first time this weekend, 3 and 4 February, with a festival atmosphere at the venue and a busy central city marking a successful entry into the global rugby series.

“Over the past few years we have held several major international sporting fixtures, and successfully delivering our HSBC World Rugby Sevens Series tournament this weekend has enhanced our reputation as a ‘can do’ city when it comes to these big events,” Mayor King says.

“The action on the pitch was fantastic, the added carnival and activities on FMG Stadium Waikato’s Mill St Field brought a new dimension to the Sevens in New Zealand, and we’ve had a packed house at the venue both days.”

Many fans wore elaborate costumes and fancy dress for the weekend, and brought a positive energy and good behaviour to the stadium. A large percentage of the patrons attending the event have been from outside the Waikato region, which Mayor King says is a firm “vote of confidence” in Hamilton.

“To have people come into our city for the weekend has been brilliant – they have had a lot of fun at the stadium, they’ve enjoyed our bars, our restaurants and our cafes, they’ve filled our hotels and motels, and by and large they’ve had a great time in Hamilton.”

Mayor King says he is also pleased at the way the city has got behind Hamilton’s inaugural international Sevens tournament.

“We had a great launch event on Friday evening in Garden Place, and a lot of the hospitality businesses and retailers have got behind the event as well.

“As a city, I think we have delivered a great event and a great weekend, and I think it will be even better in 2019,” Mayor King says. “I can’t wait for our 2019 Sevens tournament, and I think a lot of the people here this weekend will be back next year. I am confident tickets for the 2019 tournament will sell out quickly once they are on sale.

“We’ve known for a while we have terrific sporting venues and great people running them – and we’ve shown that again over the last two days. Hundreds of staff and volunteers helped make this all possible, and I want to acknowledge their contributions as well: we couldn’t have done it without them.”