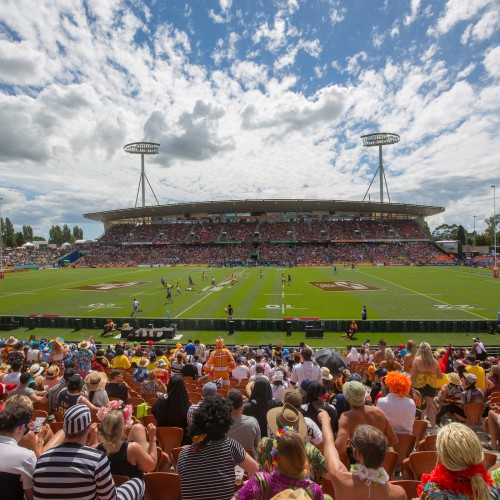 Pivotal pool matches await the Black Ferns Sevens and All Blacks Sevens teams on day one of the hotly anticipated 2020 HSBC New Zealand Sevens in Hamilton on January 25-26.

The first fully integrated men’s and women’s HSBC World Rugby Sevens Series event in New Zealand will see the Black Ferns Sevens pooled with Fiji, England and China, and the All Blacks Sevens with Scotland, Wales and USA.

The home teams will arrive for the New Zealand tournament's 21st birthday celebrations high in confidence after both emerged victorious during the previous round in Cape Town.

In Hamilton the stakes will be raised for all teams during pool play with the tournament draw meaning successful teams will advance to the Cup semifinals, rather than contesting the traditional quarterfinals.

“With this new format, every game counts so every team has to hit the ground running on day one,” All Blacks Sevens Head Coach Clark Laidlaw said. “The players can’t wait to get out on the field at FMG Stadium Waikato and play in front of a big home crowd.”

The Black Ferns Sevens will be eager to impress in Hamilton where they will be playing in front of a home crowd for the first time in a HSBC World Rugby Sevens Series event, following last year’s abbreviated Fast Four format.

“Last year was a great occasion, but to play in a world series event on our whenua for the first time, alongside the men, is something the team has been looking forward to for a long time. It’s going to be incredibly special and we can’t wait,” Black Ferns Sevens Co-Coach Allan Bunting said.

Hamilton becomes the 17th host since the women’s series began in 2012-13 and is the fourth round of the current series, which the Black Ferns Sevens lead following impressive back-to-back victories in Dubai and Cape Town in December.

The pool draw for the women’s event at FMG Stadium Waikato sees France and Spain get the tournament under way on Saturday, 25 January, at 9.30am in Pool C, with the Black Ferns Sevens taking the field for the first time against Pool A opponents China at 11.20am.

The Black Ferns Sevens will also play England on day one before rounding out the women’s pool play against Fiji early on day two.

The men’s schedule sees the hosts and current joint series leaders the All Blacks Sevens play Wales and USA on day one, then Scotland to round out Pool A action early on day two.

Fellow joint series leaders South Africa, who were victorious in Dubai, will take on Kenya, England and invitational team Japan in Pool B.

Third placed France will be looking to keep their strong run of form going as they face Ireland, Canada and Spain in Pool C, while defending HSBC New Zealand Sevens Champions Fiji will play Argentina, Australia and Samoa in Pool D.

The men’s competition gets under way with Ireland versus Canada at 11:57am on Saturday 25 January while the All Blacks Sevens first take to the field against Wales at 14:31pm.