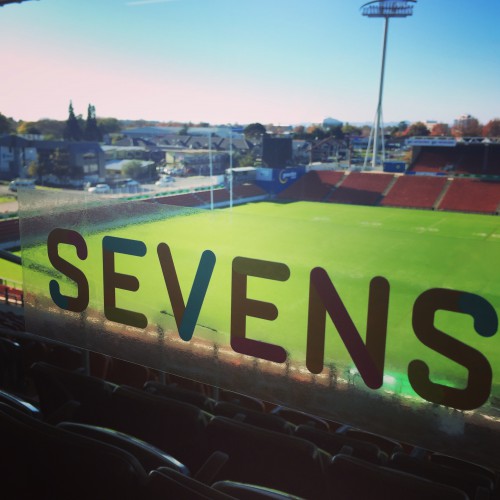 With exactly 100 days to go until kick-off, the HSBC New Zealand Sevens in Hamilton has sold out, with the 23,600 seater FMG Stadium Waikato now at capacity.

The tournament posted a strong pre-sale with over two thirds of available tickets being snapped up before the public sale even begun.

And in more good news for Hamilton, over 40 percent of ticket sales have been to fans outside of the city, meaning the city looks set to benefit from an influx of visitors over the tournament weekend.

New Zealand Sevens General Manager Steve Dunbar said he was excited about putting up the ‘sold out’ sign.

“It’s exciting to have a sell out on our hands again, and the Sevens are now officially the hottest ticket for summer in Hamilton, promising a great weekend of rugby and entertainment for all.

“It’s no secret the tournament struggled over the last couple of years, but the move to Hamilton has clearly revitalised what remains a premier global Sevens event, and we can’t wait for kick-off in 100 days’ time.”

Dallas Fisher, Managing Director of 37 South Events, who is partnering with New Zealand Rugby to run the New Zealand Sevens, said bringing the tournament to Hamilton promised to be an economic success for the city.

“With over 40 percent of tickets sold outside of Hamilton the city is set for an invasion of visitors over Sevens week. This is great news for our local economy with accommodation, retail, hospitality and transport services set to benefit.

“The success of the Sevens so far proves there is an appetite for international events in Hamilton. Not only will we be hosting thousands of visitors from out of town, but also 16 international Sevens squads, global sponsors and World Rugby officials. It is a huge operation and we should be proud it is happening in our city alongside the huge economic windfall it promises to bring.”

The tournament organisers are also officially announcing today three entertainment zones outside the stadium that will form part of a wider event precinct.

A separated area on Mill St Park will host a Family Fun-Fair, with this area directly connected to the Family Zone which will be situated at the Seddon Street end of the stadium in the traditional Green Zone. Families are being encouraged to bring blankets and picnics with them.

And Fred Jones Park will house the teams’ Warm-up Zone where fans can watch the players up close as they prepare for their games.

“Hamilton will be a unique tournament with the party happening both inside and outside the stadium. Fans will be able to roam through the different precincts and enjoy the range of rugby, hospitality and entertainment on offer,” said Steve Dunbar.

While the public ticket sales allocation has been exhausted, there are still limited opportunities to get tickets through All Blacks Tours travel packages, hospitality options, and offers from tournament partners.

There may be a small release of tickets not required by partners soon. Fans need to sign up below to be notified of this “flash sale”.