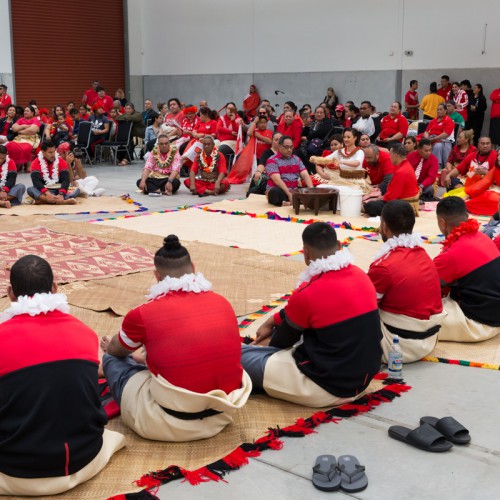 To kick off match week in Hamilton, a traditional Tongan kava ceremony was held at Claudelands.

The preparation of kava is a sacred rite in most Polynesian communities, and Monday night’s event was the first of its kind for Tongan winger and fullback Will Hopoate – who was part of the Tongan team which claimed two victories in Hamilton during the 2017 Rugby League World Cup.

“My tongue is a bit numb actually, it was pretty strong,” said Hopoate of the brew, known to have relaxing and euphoric effects on those who consume it.

“This is my first kava ceremony, so it was all new to me – it was really good to experience.”

Monday night’s event lasted about 90 minutes, and included traditional Tongan dance performances – and a chance for the passionate Tongan fans to meet and greet the team’s numerous National Rugby League superstars, among them Jason Taumololo and Andrew Fifita.

“It’s good to be amongst the community, and amongst our family and fans,” Hopoate said of the event.

“Being Tongan, everyone’s kind of related!”

Mefi Naufahu, Chair of the Tongan Council, described the kava ceremony as “the heart and the essence of our culture and tradition”.

“We can’t do any celebration, ceremony or funeral without kava. It’s about welcoming people, and happy occasions.”

The event featured two respected elders of Hamilton Tongan community, who took on roles as formal MCs and exchanged speeches as part of the welcome, before the preparation and sharing of the kava took place.

Mr Naufahu said the preparation of kava is a special honour bestowed on one individual in a family or community – and often that person will be responsible for preparation of the drink for a particular area.

Of the game itself, Mr Naufahu said the Tongan community appreciated the time taken and effort the team had made to come together to represent their country in Saturday night’s match.

Tickets for Saturday night’s game at FMG Stadium Waikato, and the rest of the Great Britain Rugby League Lions Tour and Oceania Cup are available here, and start at $20* for adults and $10* (plus booking fees) for children.