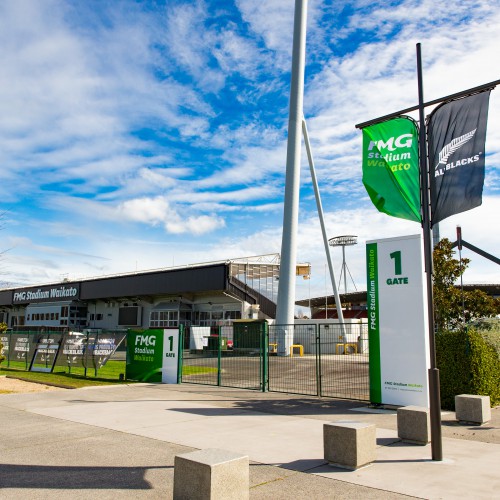 Free public transport, parking for e-scooters, a festival curtain raiser and an afternoon kick-off are key features of the All Blacks vs Tonga match in Hamilton this Saturday (7 September).

Hamilton’s FMG Stadium Waikato will be the venue for Saturday’s match, a final hit-out for the two teams before they travel to Japan for Rugby World Cup 2019. The match kicks off at 2.35pm and will be preceded by a festival game between the New Zealand Barbarian Legends and the Pacific Legends, starting at 12.10pm.

The Council has worked with stakeholders to offer transport alternatives for fans attending the match.

“Fans with tickets for the match can ride for free on any city or regional bus service operated by BusIt – they simply need to show their match ticket to the bus driver,” Mr Hooker says.

Information on the bus service arrangements for All Blacks vs Tonga can be found on the BusIt website.

Senior Sergeant Andrea McBeth of Hamilton Police urges fans attending the game to bring their energy and passion, but look after themselves and stay safe.

“We want fans to have a great time on match day, but look after each other, which includes not causing disorder at the game or on the roads,” she says.

“Pedestrians are very vulnerable on the road, especially if they have been drinking alcohol and we want to encourage all of those travelling to and from the game to abide by the road rules and not cause frustration to other road users.”

Patrons attending the match are urged to bring cash for food and beverage purchases.

Fans arriving in the city early can visit Waikato Museum’s Hard on the Heels exhibition, which showcases the work of noted rugby photographer Peter Bush. The museum opens at 10am and entry is free.

The Waikato District Health Board has issued information on the current measles outbreak in the upper North Island. People showing symptoms of the disease – or who have been in contact with those who have been confirmed as having measles – are being urged not to attend large public events.

Members of the All Blacks will also be in Garden Place from 10am on Friday morning, cooking a barbecue for fans.