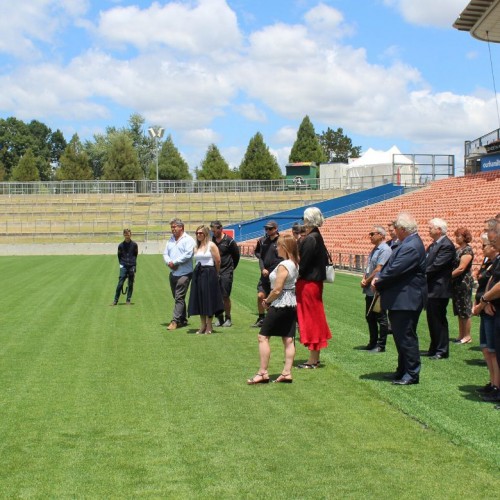 The first event on the new surface is the HSBC New Zealand Sevens 2020 on 25-26 January, with Tim Mikkelson, co-captain of the All Blacks Sevens, anticipating a great surface for the international event.

“We are really looking forward to the Hamilton Sevens and knowing we’ll be the first to have a run on the new pitch is cool. We’ve heard it will be a fast track so it’s perfect for Sevens” he says.

Mayor Paula Southgate and Councillors joined project team members and dignitaries at today’s blessing for a project which has been years in the planning, Mayor Southgate saying the new turf adds a further dimension to the quality of the stadium and its outstanding reputation as an international and national venue.

“Our city has the facilities to host fantastic world-class events at world-class venues and we are seeing that more and more. Events add real vibrancy to our city and they provide economic benefits for local businesses and their staff,” Mayor Southgate says.

FMG Stadium Waikato hosts Gallagher Chiefs Investec Super Rugby matches, All Black Tests and in the past has hosted international rugby league and FIFA age group world cups. The stadium is managed by the H3 division of Hamilton City Council, with the turf replacement project funded through the Council’s 10-Year Plan.

The new surface means the stadium is the first venue in the North Island to use the Desso hybrid turf – a product which includes 5% artificial fibre and has a stabilising effect.

Around 2200 tonnes of new sand underlays the new surface, with the Desso product ‘sewn’ into the sand using a special machine shipped from Europe. Moisture meters in the new turf will enable improved monitoring of the turf moisture levels and give staff greater insight into the surface’s irrigation needs.

The turf replacement project also includes several environmental sustainability aspects – the construction of an artificial road around the periphery of the playing area, allowing for easier set-up and pack-down for digital signage and broadcast technology required for televised events, and a reduced use of fertiliser and water.

The HSBC World Rugby Sevens Series tournament in Hamilton on 25-26 January is the first fully integrated men’s and women’s tournament in New Zealand and will see the Black Ferns Sevens pooled with Fiji, England and China, and the All Blacks Sevens with Scotland, Wales and USA.

The home teams will arrive for the New Zealand tournament’s 21st birthday celebrations high in confidence after both emerged victorious during the previous round in Cape Town.