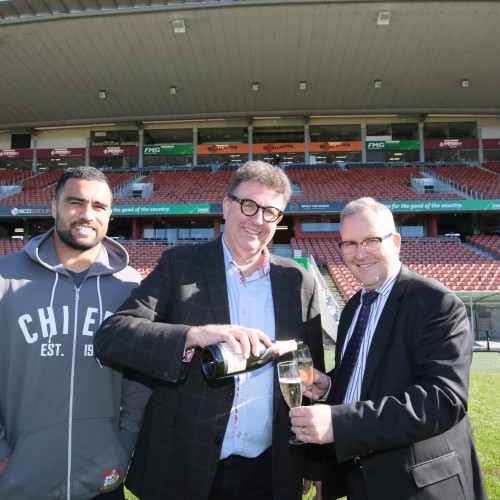 Hamilton – a city with a proud rugby heritage – will be the home of the New Zealand leg of the HSBC World Rugby Sevens Series for 2018 and 2019.

The announcement of the shift to the Waikato from Wellington was made by New Zealand Rugby’s Chief Strategy and Operations Officer Nigel Cass at FMG Stadium Waikato today.

Cass said Hamilton offered a world-class stadium built for rugby fans, a central location for travelling fans, and most of all, a host community that loves rugby.

“Hamilton and the Waikato region are rugby mad and we’re looking forward to introducing international sevens to the local community and for visiting fans from around New Zealand to experience the heart of rugby in New Zealand.

“We are confident our partners in Hamilton will deliver an exceptional tournament that fans will love on the weekend of 3 and 4 February.”

Cass said hosting a New Zealand leg of the World Sevens Series was important for New Zealand Rugby (NZR) as the sport continued to grow in popularity across the globe.

“The inclusion of sevens in the Olympic Games has introduced the sport to a new group of athletes and fans and NZR is committed to developing a strong sevens programme and showcasing this exciting sport at home.”

NZR has partnered with 37 South, FMG Stadium Waikato, Hamilton City Council and the Chiefs to host the tournament in Hamilton.

37 South Managing Director Dallas Fisher said he was delighted to be part of the event.

“The planning starts now and we have some big ideas to ensure sevens becomes the hottest ticket in town. At FMG Stadium Waikato we can segment audiences so party goers, families and rugby fans can all enjoy the event and entertainment in their own space.

“We will take all the best aspects of the two-day event and add our own special flavour of entertainment and experiences.

“We are asking fans for their input via the NZ Sevens Facebook page where they are welcome to share their ideas and wishlists.”

“Hamilton has excellent credentials when it comes to stadia-based Major Events. Over the last few years we’ve delivered successful matches in three World Cups across three sports, All Blacks tests, Super Rugby semis and finals, as well as international cricket,” he said.

“We’re looking forward to showcasing our city and region and their fantastic attractions to visiting fans while they’re in town for what will be a great new event for Hamilton. Come and make a weekend of it.  Hamilton is proud to be able to support the event through the provision of FMG Stadium Waikato - this is what the stadium was built for.”

Cass said moving the international tournament from Wellington was not a decision made lightly, but it was time to start a new chapter for the tournament in New Zealand.

“We delivered 18 years of good times and great tournaments in the capital, thanks to the exceptional teams we worked with at Wellington City Council, WREDA, Westpac Stadium, Police, hospitality industry and our fantastic volunteers. I have nothing but praise for all those who contributed to the Wellington Sevens for almost two decades.”

Sign up to receive all the latest HSBC NZ Sevens information, including first access to tickets from July, simply enter your email address over on our website.