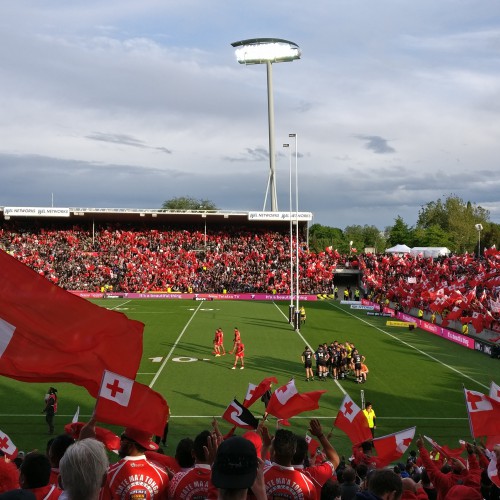 “I’m excited to be getting back into camp with my teammates now we have certainty that we will be playing these two Test matches,” Taumalolo said.

“The best possible team will be taking the field and we know our match against Great Britain in Hamilton will be incredibly competitive. Then we get the chance to have another go at Australia in Auckland during the Triple Header on November 2.

“We are pumped and focussed on these two major games and have plenty of motivation to play our best. So I just want to say to our Tongan fans - thank you for sticking by us. We love you and can’t wait to put on our jersey and do you proud.

“You are truly the best fans in the world, and we are very grateful for your patience. We can’t wait to witness the ‘sea of red’ back again in Hamilton, and let’s show the world we can fill up Eden Park.”

Tonga Invitational XIII coach Kristian Woolf said he was delighted to have assembled a squad capable of challenging the strongest rugby league nations on the planet.

“This is a great opportunity for us to go up against two of the best teams in the world,” Woolf said.

“Australia are the top-ranked team on the planet, and we also get to face the Great Britain League Lions, an outfit that has not been together since 2007.
“But not only will these Tests be historic, they will be about uniting a country – all our team members want to do is make the wonderful people of Tonga proud.

“And to do that we are looking forward to the challenge of playing the best two teams in world rugby league, and showing what we are capable of.”

Jeremy Edwards, spokesperson for GB Oceania – the joint venture delivering the GB League Lions Tour and Oceania Cup – said: “It’s been an incredibly challenging few months for international rugby league, however Tonga is a critical part of the game and we are pleased we’ve been able to assemble a stellar Tonga Invitational XIII side of the highest order.

“Our focus has been on maintaining the quality of international rugby league and responding to what the fans want and expect, which is to see the best players in the world.

“The undoubted strength of Tonga Invitational XIII will make for an exciting Triple Header when they play Australia at Eden Park, and a hugely competitive contest in Hamilton when they take on the Great Britain Rugby League Lions.”

The Oceania Cup continues with a blockbuster Trans-Tasman showdown between the Kiwis and Kangaroos at Wollongong’s WIN Stadium on Friday, Oct 25. The Tonga Invitational XIII are then in action against the GB League Lions in Hamilton the following day.

A week later, Auckland hosts the biggest day in international rugby league history, with Fiji taking on Samoa, Australia’s Kangaroos facing the Tonga Invitational XIII and the Kiwis clashing with the GB League Lions in a massive triple-header.

Taumalolo said he and his team-mates were delighted to be able to concentrate on preparing for action on the field.

“The players are happy and relieved that this matter has been resolved and we can focus on what we need to do - play the best footy we can for our families and our people,” Taumalolo said.