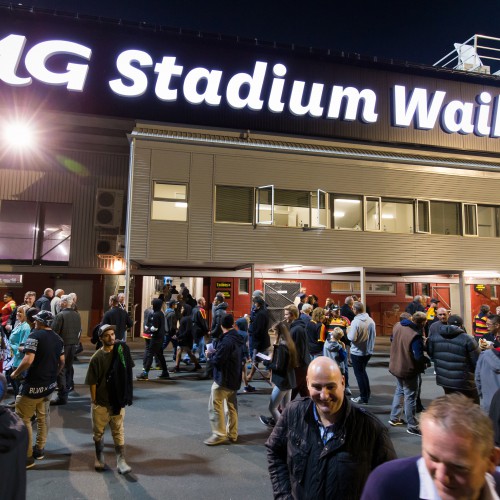 In an initiative led by the two-time Investec Super Rugby champion club, a second big screen has been installed at the western end of the stadium in the Green Zone embankment area.

At 72 square metres, the second big screen will be substantially larger than the original big screen near the Whatanoa Gate, at the eastern end of the stadium. Fans throughout the stadium will be able to enjoy an even better live experience courtesy of the giant screen.

Andrew Flexman, Chief Rugby Club Chief Executive, says the club has worked proactively with Council to enhance the fan experience and invest in the stadium.

"The investment in a second big screen is the culmination of a lengthy project aimed at providing the best live rugby experience in the country," he says.

"It has been a great example of a critical partnership in the Waikato sporting context working well," Mr Flexman says. "The H3 team has shown great commitment to this project and we appreciate the support we've had from them."

The Chiefs Rugby Club has covered the cost of the screen, while infrastructure to house and install it has been funded through H3's budgeted renewals programme.

H3 is the unit of the Council which manages the city's event facilities.

Chad Hooker, H3 Operations Director, says the Chiefs investment in the stadium strengthens their connection to the venue and the city.

"FMG Stadium Waikato is the Gallagher Chiefs' home ground, and their contribution to improving our stadium shows their willingness to continue working with us to make the venue one of the best in the Southern Hemisphere," Mr Hooker says.

"We're confident Gallagher Chiefs supporters right around the stadium will appreciate the second screen and the terrific vision it's going to provide."

Mr Hooker says the staff and contractors who have installed the screen have overcome challenging weather conditions, particularly strong winds, in recent days to complete the job.

"We're pleased to have the project completed and fans attending this Saturday night's Gallagher Chiefs vs Force game really will get a great view of the game," he says.

Tickets for the match can be purchased from Gate 1 at FMG Stadium Waikato, Ticket Direct, and Stirling Sports. The Gate 1 ticket office is open today until 6pm, is closed tomorrow (Easter Good Friday), but will be open from 9am to 6pm on Saturday, 26 March.