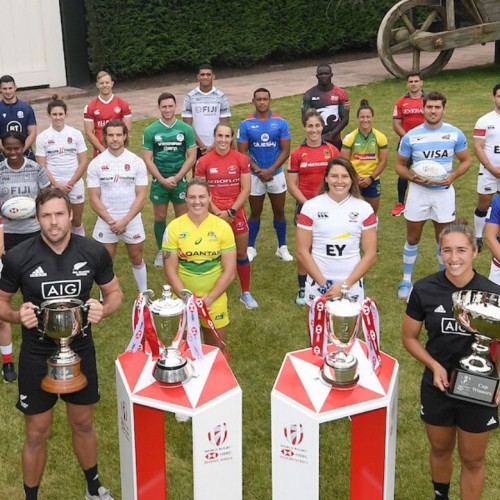 Leaders of 28 international sevens teams have gathered in one of Hamilton’s most iconic and unusual attractions for the annual HSBC New Zealand Sevens captains’ photo on Wednesday.

All Blacks Sevens co-captain Tim Mikkelson and Black Ferns Sevens skipper Sarah Hirini took centre stage as players from around the world provided the first glimpse of a Surrealist Garden that dwarfed its rugby guests.

“It’s always special to play in New Zealand and you get a real sense of pride to be able to share a little bit of your hometown with the other players,” Mikkelson said. “The Hamilton Gardens are so well known in the Waikato region and a pretty cool way to showcase the city of Hamilton.”

Inspired by Alice in Wonderland, the Surrealist Garden provided a bizarre backdrop featuring a giant-sized door and wheelbarrow as well as twisted trees with moving mechanical branches.

But the venue wasn’t the only reason the 2020 photoshoot was like no other in the history of the HSBC New Zealand Sevens, which will be played at FMG Stadium on 25-26 January. For the first time 12 women’s players joined 16 men’s players for the official tournament captains’ photo as the event prepared for its first as a fully integrated tournament.

“It’s really special to have the men’s and women’s tournaments played together for the first time,” Hirini said. “It’s amazing to have 28 captains gathered for the photo and everyone can’t wait to get out on the field on the weekend.”

Hamilton Mayor Paula Southgate was on hand to officially welcome the captains to her city and wished them well for a weekend that will see fans treated to 60 games of sevens played ove r two thrilling days.

“We are thrilled to have the tournament back in Hamilton for what we know will be a fabulous weekend of sport and entertainment. We’re looking forward to it,” Southgate said.

The All Blacks Sevens and Black Ferns Sevens both head into the tournament as the respective leaders of the men’s and women’s HSBC World Sevens Series ladders.

Fiji are the defending champions of the HSBC New Zealand Sevens where they have enjoyed strong support in Hamilton for the past two years.