Sevens party kicks off with free breakfast in Garden Place 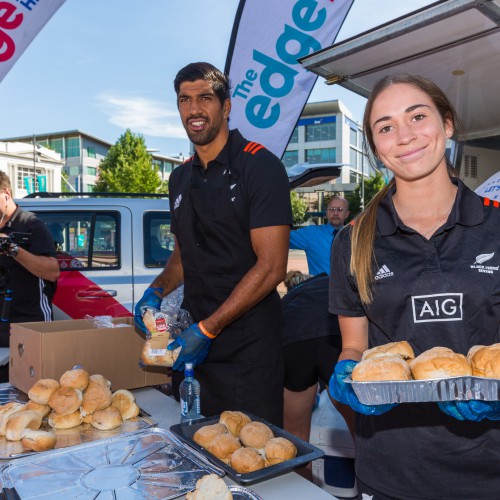 The HSBC New Zealand Sevens is turning 21 and Hamilton is buzzing as teams, supporters and media from across the world arrive for the party.

Hamilton’s central city is the focus for Tuesday as the Black Ferns Sevens and All Blacks Sevens teams host a free barbecue in Garden Place between 10am and 11am, offering a chance for photos with the players, autographs and breakfast.

On the weekend the attention shifts to FMG Stadium Waikato, with the best Sevens players in the world showing their skills in the first fully integrated men’s and women’s HSBC World Sevens Series tournament in New Zealand.

The Black Ferns Sevens are pooled with Fiji, England and China, and the All Blacks Sevens with Scotland, Wales and USA. Both teams were victorious during the previous round in Cape Town.

Off-field there’s great entertainment for the fans. Chart-topping reggae-roots group Sons of Zion will perform live on Saturday at the Mill Street Park R18 Entertainment Zone. Sons of Zion jumped at the opportunity to perform at the HSBC New Zealand Sevens and can’t wait to be part of the tournament’s 21st birthday celebration. They will be joined by soulful Wellington singer-songwriter Louis Baker.

Top Kiwi acts Mitch James and JessB will also entertain sevens fans during the weekend in what will be a gathering of some of New Zealand’s hottest 2020 music acts.

There will be plenty of other activities to get stuck into across the weekend, with three festival zones in action – the Carnival Zone, Keppler X Haval VIP Zone and the Mill Street Park Zone. There will be amusement rides and a range of food trucks set up across the Festival Zones.