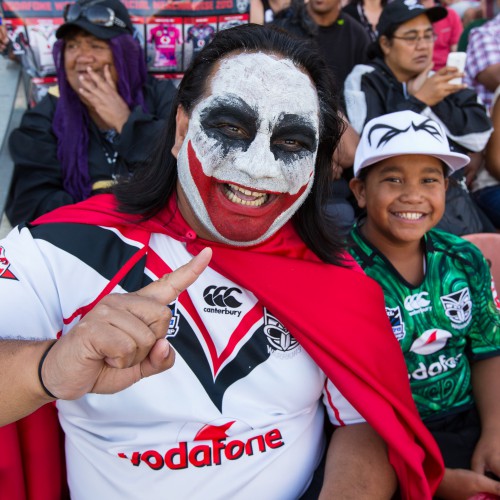 The Vodafone Warriors will start an NRL campaign at Mount Smart Stadium for the first time in eight years after today being handed back-to-back season-opening home games in 2017.

In other key features of the just-released draw, five of the club’s first six matches will be played on home soil while the Vodafone Warriors have landed five Friday night games in three different New Zealand venues plus one in Australia.

The club’s 23rd season opens against the Newcastle Knights at Mount Smart Stadium on Sunday, March 5 (4.00pm kick-off) followed by a blockbuster against the Melbourne Storm in the first of four Friday night home games on March 10 (8.00pm kick-off).

The Vodafone Warriors’ last season-opening home game at Mount Smart Stadium was a 26-18 win over Parramatta in 2009. Since then they have had ‘home’ starts just twice but those two matches in 2011 and 2012 were both played at Eden Park.

“It has been too long since we started our season at our home ground so we couldn’t be more excited knowing we’ll be at Mount Smart Stadium for the first two rounds,” said Vodafone Warriors managing director Jim Doyle.

“That’s fantastic for the team, our members and other supporters after being forced to open our campaigns away over the last four seasons including back-to-back games on the road the last two years.

“Having five of our first six games in New Zealand is a big help and introducing an earlier kick-off for the first Friday night game (8.00pm NZT) also works in our favour.

Friday night home games have been scarce for the Vodafone Warriors; their last experience was against the Bulldogs in July, 2011.

In 2017 the Vodafone Warriors have Friday night home games at Mount Smart Stadium against the Storm on March 10, the Canterbury-Bankstown Bulldogs on June 23 and the Penrith Panthers on July 14.

As announced yesterday, the Vodafone Warriors are taking a home game to Hamilton for the first time; they’ll face the St George Illawarra Dragons at FMG Stadium Waikato on Friday, May 19 (8.00pm kick-off).

The fifth Friday night match in New Zealand is an ‘away’ game against the Bulldogs on March 17, the first-ever NRL match to be played at Dunedin’s Forsyth Barr Stadium. They also play the Eels in Sydney on a Friday night.

“It’s a positive for us being able to have some Friday night games,” said Vodafone Warriors head coach Stephen Kearney.

“It’s also certainly helpful playing five of our first six games in New Zealand. It’s always a positive being on home soil and playing in front of our members, families and fans.”

The Vodafone Warriors don’t venture outside New Zealand until the fourth round when they take on the Dragons on March 26.

Today’s draw release provides dates, kick-off times and venues for each of the first 20 rounds with details for the last six rounds being revealed later in the season.

Of the Vodafone Warriors’ first nine confirmed home games, four are on Friday nights, one on Saturday night (the Brisbane Broncos on May 27) and four on Sundays (all before the end of April); all 4.00pm kick-offs, they’re against the Knights (March 5), the Titans (April 2), the Eels (April 9) and the Roosters (April 30).

The Vodafone Warriors play home and away games against the Knights, Storm, Bulldogs, Dragons, Titans, Eels, Raiders, Panthers and Sea Eagles (the away match against Manly is again in Perth but Penrith won’t be returning to Christchurch).

The clubs they face once are the Roosters, premiership-winning Cronulla Sharks and the Broncos at Mount Smart Stadium and the Rabbitohs, Cowboys and Wests Tigers away.

Tickets for all games will go on sale in the New Year.