With a Little League Luck 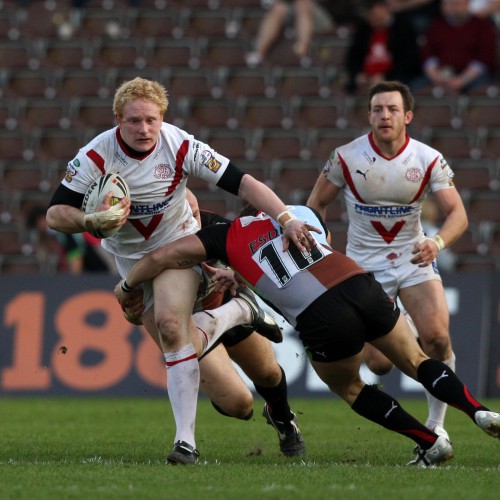 “It’s a bit of luck really, mate,” says the Englishman, on the line from his home in Sydney.

“I’ve not had any really serious injuries in my career – it’s been a blessing. Yep, definitely luck.”

Graham, who plays for the St George Illawarra Dragons in the National Rugby League (NRL), is one of the English superstars of the game, and will take the field at FMG Stadium Waikato on Labour Weekend when he turns out for the Great Britain Rugby League Lions in their GB League Lions Tour and Oceania Cup clash with Mate Ma’a Tonga.

Graham, a prop, has been plying his trade in the NRL since 2012 – leaving British rugby league stalwart club St Helens to initially join the Canterbury Bankstown Bulldogs, where he spent five years. His stint with the club colloquially known as “the Doggies” included his only previous visit to Hamilton when the Bulldogs claimed a narrow 16-12 over the Vodafone Warriors.

The big front-rower hopes to get a bit more of a look around the city this time: “We didn’t really get a chance to take too much in,” he recalls of his previous visit. “Unfortunately, we were only there for two days. This time it will be a bit different, being on the tour… we’ll probably hit a few of a few of your local coffee shops. But we’re there for business, not pleasure.”

Graham first began playing rugby league as a seven-year-old, and has some familiarity with Australia and New Zealand, first touring the two nations as an U16 age-group rep with England. He enjoyed visiting Australasia immensely, and playing in the NRL quickly became a goal.

“You always want the opportunity to come and play over here …. when I dared to dream about my (rugby league) career, I thought I’d do that,” he says.

When the Bulldogs came knocking, he took his chance.

“I was playing at St Helens, and I kind of figured it was ‘now or never’. I’ve always wanted to get up and do things, and I’d always wonder ‘what if’, if I didn’t go (to the NRL). And if it didn’t work out, at least I’d know that.”

Graham is now an NRL veteran, and a regular on the international scene. During the GB League Lions Tour and Oceania Cup competition, he’ll notch up his 50th international match – 44 of those for England, and four for the Great Britain Lions. He is one of only two players in the Lions side who’ve turned out for the combined team before, appearing in the 2006-2007 side alongside fellow NRL superstar Sam Burgess.

The combined Lions team is rare, but Graham expects good camaraderie among a team which will comprise mainly English players but also players from Wales and Scotland.

“What I’ve found is rugby league lads are good, no matter where you go, or where you’re from,” he says. “After two or three days in camp, everyone will be best friends and we’ll be looking forward to getting on the field together.”

While he waits for the international tournament to start, Graham is keeping active and fit. He had a couple of weeks of proper rest after the Dragons’ season ended but is now back in the gym with a group of club team-mates. The group’s efforts involve gymnasium workouts conditioning drills, injuries prevention work and the familiar passing and tackling routines.

Sydney’s weather is “taking a turn for the better”, he says – making training a more attractive proposition than it would be in cold and darkening northern England.

Graham will head back to England for Christmas, post-tour, but won’t get a chance to see St Helens play – the UK Super League season runs parallel to the NRL. He has a year to go on his Dragons contract so will be back in the NRL in 2020 and says there’s “a few variables” that will dictate when he chooses to retire from the sport he loves.

He has great advice for aspiring rugby league players who want to make it into the game’s professional ranks.

“Just enjoy it, enjoy working hard. Rugby league is a fantastic sport to make your career. I’d say if I had my time again, I’d want to enjoy it more.”